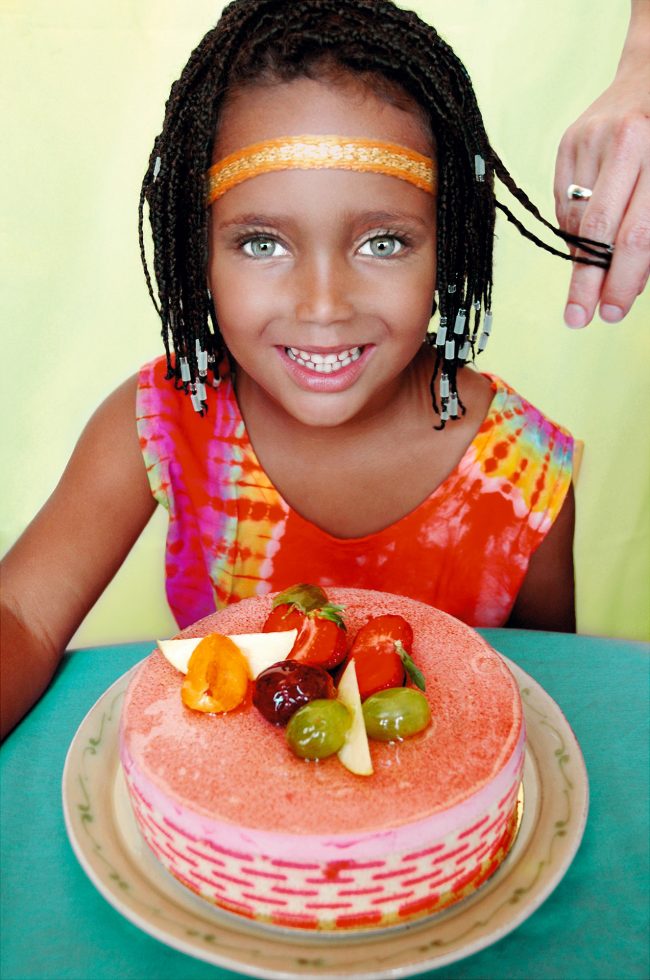 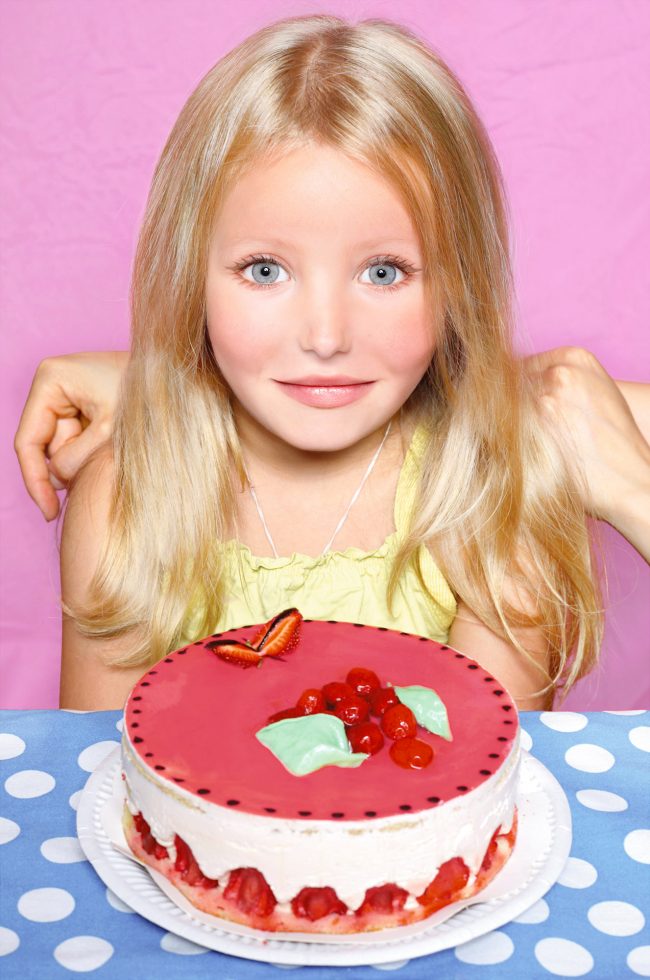 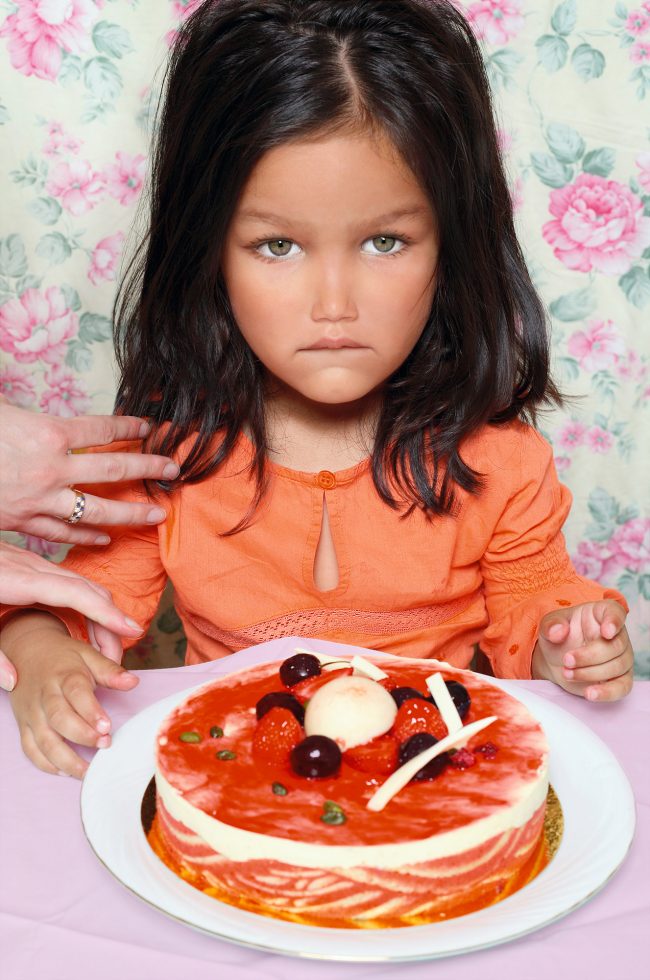 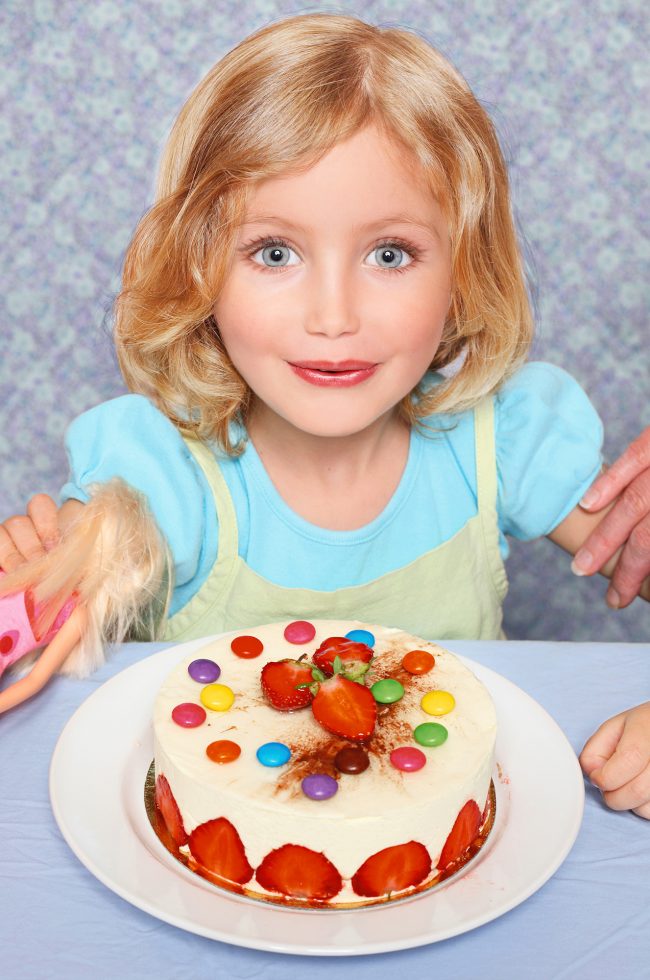 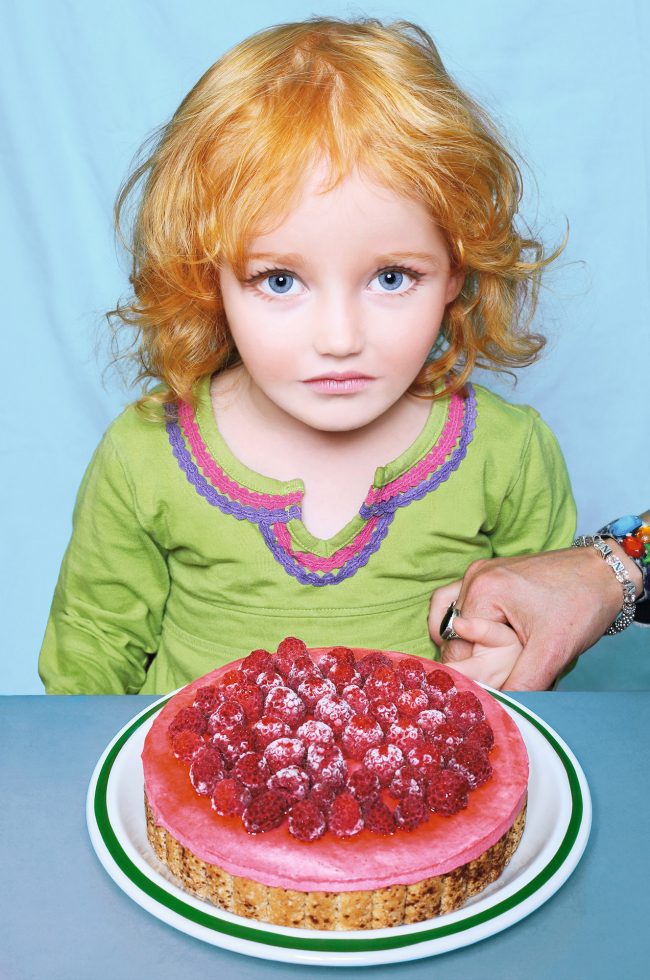 Today, aesthetics is more present than ever. In a society where the image takes a full part in the daily environment, we’re facing a phenomenon of normalization.

This demand of perfection was initially built around the woman, then around the man, and now the child is the core subject. Altogether symbol of innocence, central in the family unit and advertising’s favourite target, the child has never been so protected and paradoxically so put forward as a commercial object. Nowadays, little girls want to look like their idols: Lorie, Priscilla, Britney Spears… The “Lolita phenomenon” keeps growing, really ingrained in our society. These baby women can be seen everywhere: on TV, in magazines, films, etc… My series “Little Dolls” questions this phenomenon.

This work has been inspired by a photography of a little girl, taken for an advertising campaign of the multinational company Mc Donald, an apostle of the standardization of the way of life. This little blond head for magazines, as sterilized as the cake in front of her, was being offered a Barbie doll in the end of the shooting. This gave me the idea of hybridizing her face with the one of the toy. A body mutation operated by computer tools, in the same artistic line as Aziz and Cucher or Inez Van Lamswerde. Creative works where one plays with pixels as a scientist does with genes, to recreate the Man, the child here, at will.

The process is always the same: a little girl, a cake, a colourful background and the parents. Then the transformation begins, thanks to a software retouching images. I apply a mask on the face of the little girl and remodel the nose, polish the features and modify the carnation, change the colour of the eyes, of the hair and recomb her. The background, position and proportions get standardized. This form of digital plastic surgery erases the real, replaced by completely artificial image. However, despite the lifting and relooking, I wanted to keep a certain idea of childhood. The hair can be somehow tangled, the nails are not well-groomed, the clothes, the accessories remain and help producing an impression of reality which leaves its identity to each image. This operative mode leads to a form of personalities normalization. 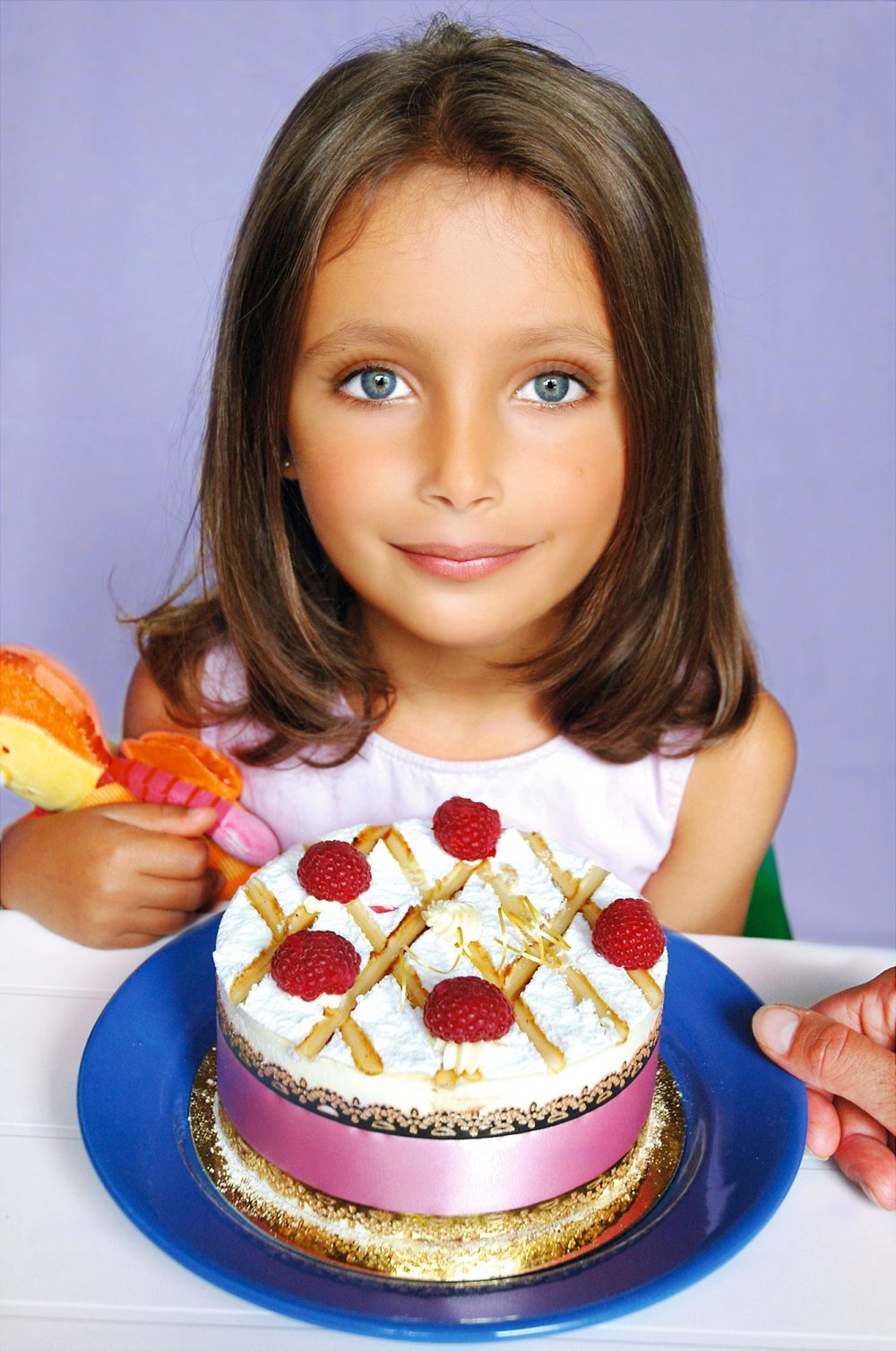 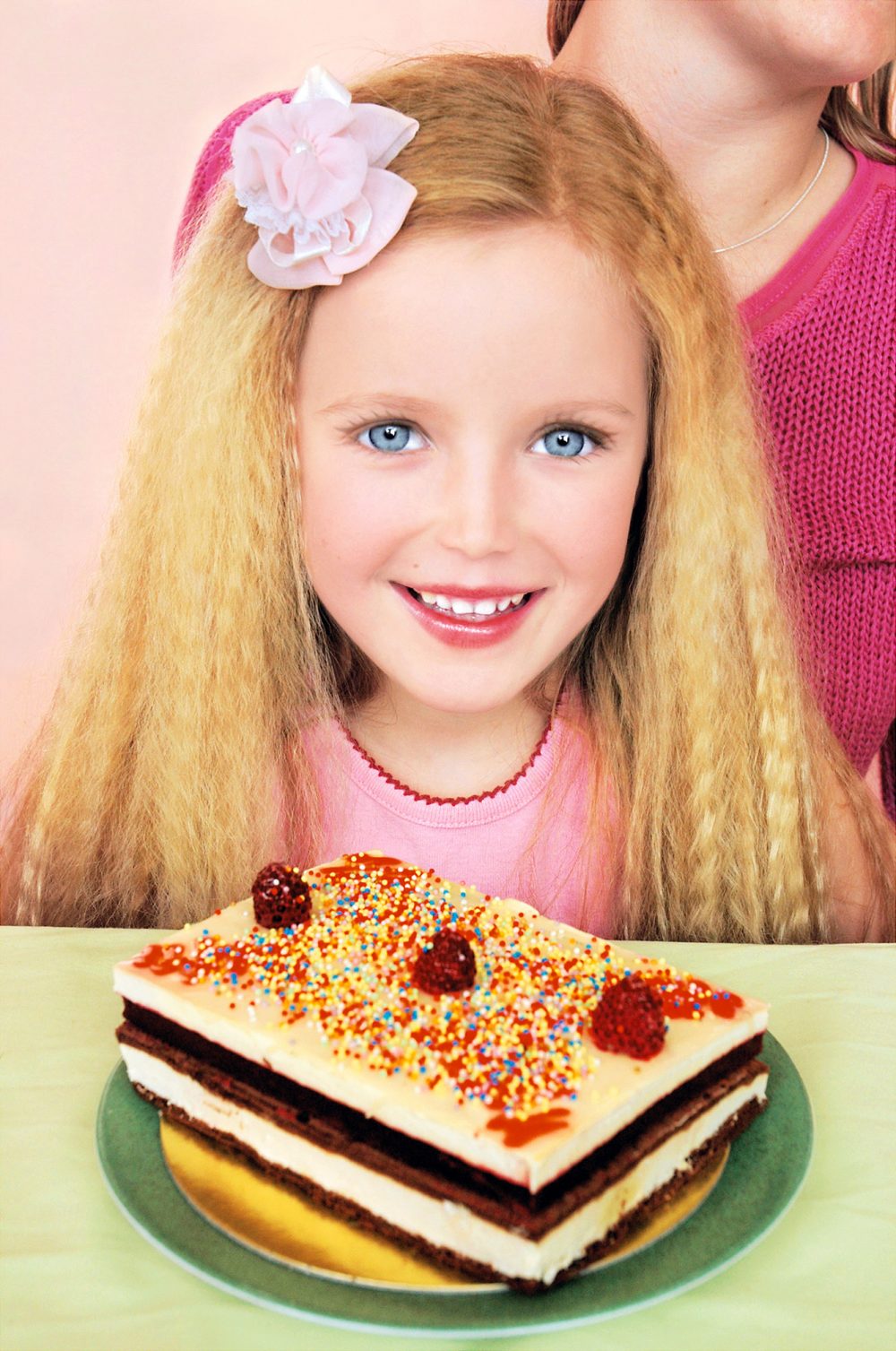 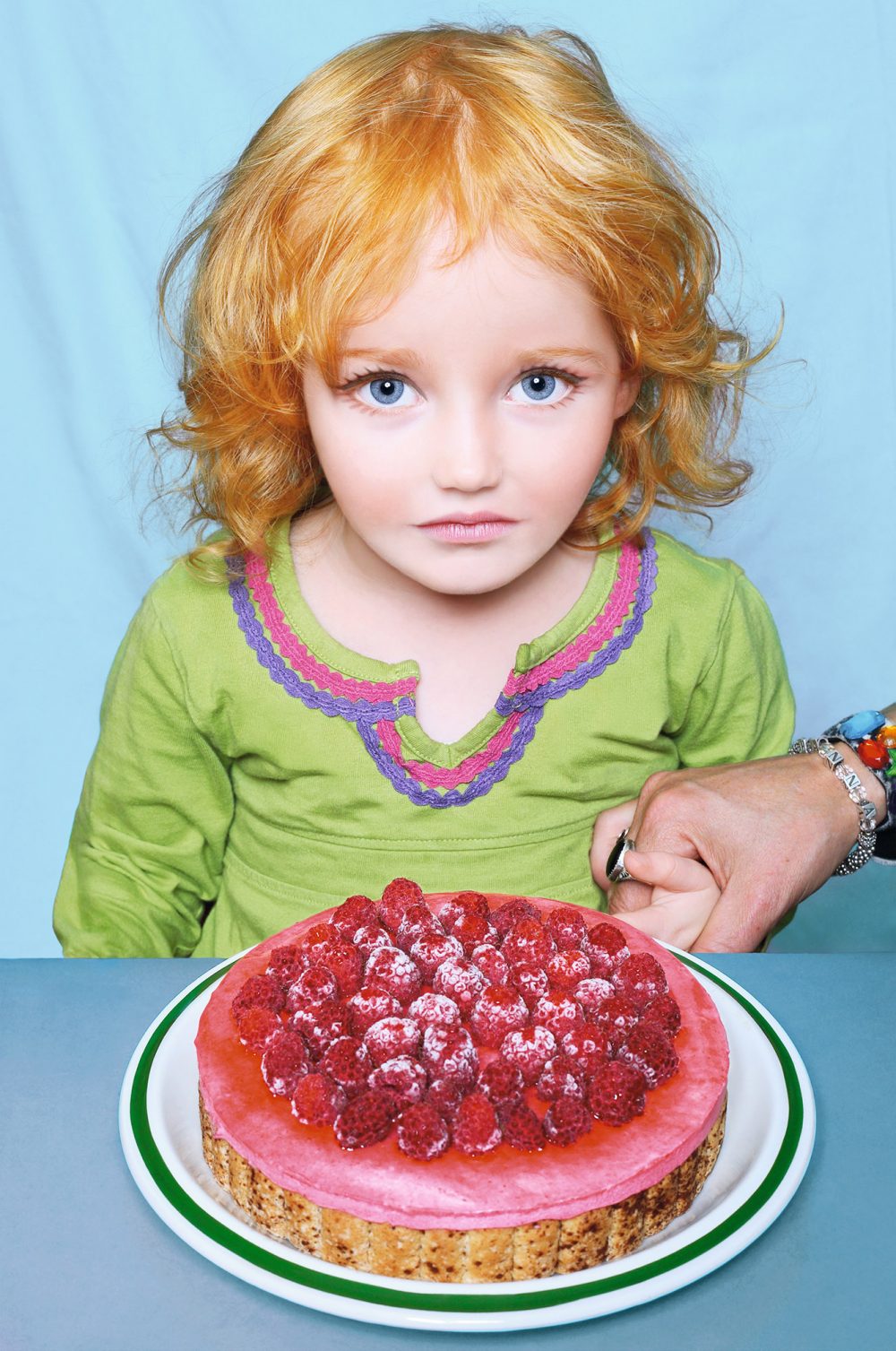 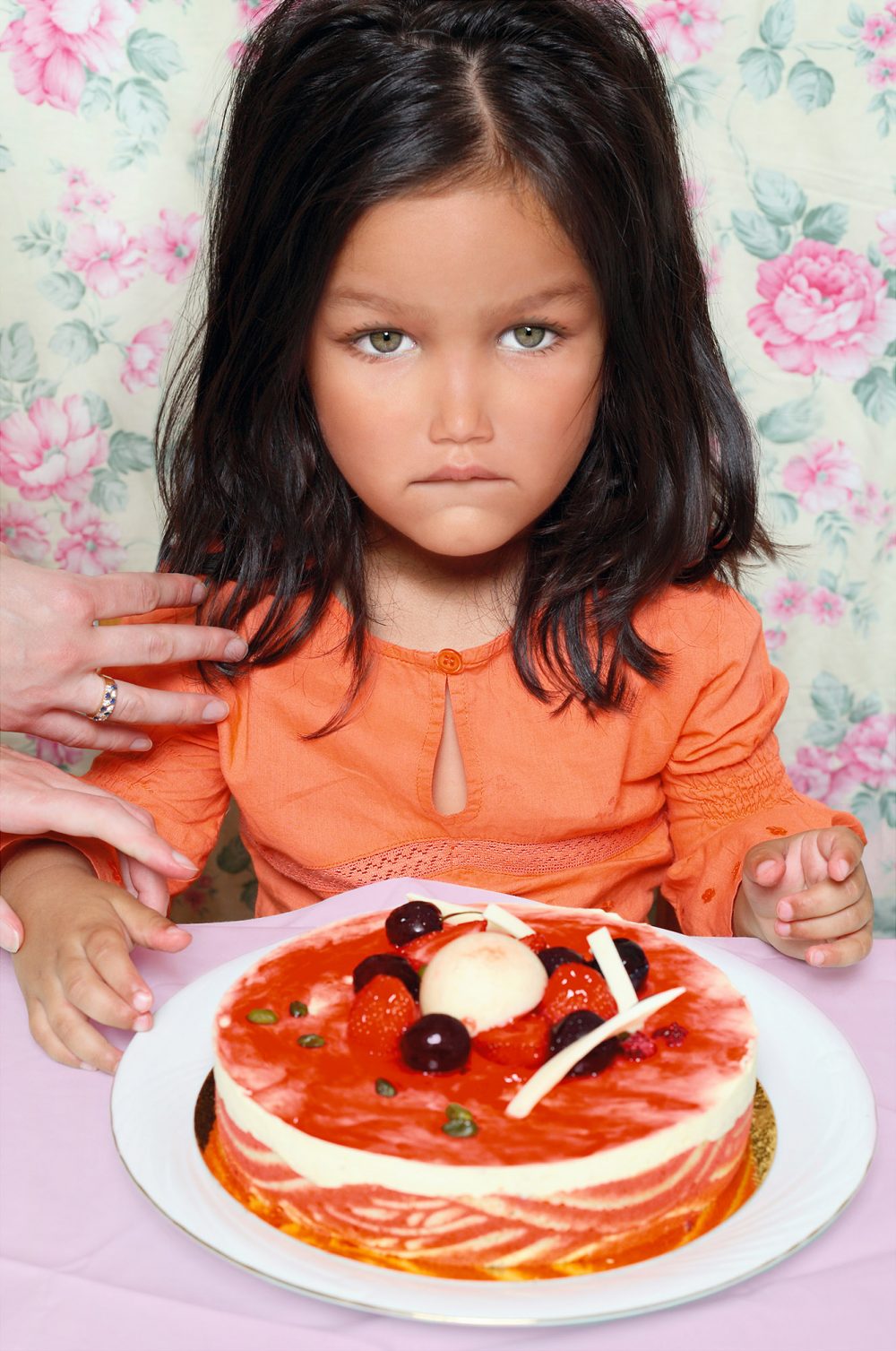 These images of a “worrying strangeness” charm and disturb at the same time, thanks to this “minimal gap” of representation. These images want to look like sweeties, colourful but sour. This “minimal gap” can be found also in the formal revival of the birthday photography. This social ritual, which gathers the family around the child, flirts here with the advertising cliché of little girls who have become women, in the pursuit of eternal youth. With the systematic presence of adults in the image, these portraits question the childhood’s feminization as well as the parents’ dreams’ projection on their children. This also evokes of course the beauty contests for little girls, widespread in the US as “Miss Beauty Children”, propelled towards the world of plastic competition. This is before all the opportunity for the parents to make their dreams come true through their offspring. They transpose the norms of adult beauty and in the same way their dreams of success.

The “Little Dolls” series is ambiguous. Neither family photography nor advertising imagery, the representation oscillates between womanhood and childhood, fantasy and reality. The digital technology subtly infiltrates the image, as the aesthetic codes of adults have impregnated the world of childhood. The digital photographic creation that I present here with “Little Dolls” wants before all to mirror our society, reflect the children’s dreams and their parents’ fantasies.